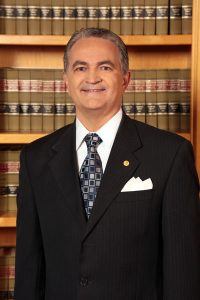 Mr. Manglardi received his undergradute degree from the University of Central Florida in 1984. He graduated with honors in May of 1987 from Florida State University College of Law. While in college and at law school, Mr Manglardi received a number of honors, scholarships and awards, including being ranked number one in his class in his first year of law school. Over the past 20 years, Mr. Manglardi has successfully represented thousands of individuals and families throughout the State of Florida in various types of personal injury claims, including automobile accidents, defective product and theme park negligence.

Mr. Manglardi resides in Central Florida with his wife and four children. He is a member of the Million Dollar Advocates forum and is active in various law related and civic organizations. He is a member of the Orange County Bar Association and served on its Professionalism Committee and Law Related Education Committee. He has chaired the local Florida Bar Grievance Committee, which investigates complaints of unethical conduct against attorneys and volunteers as an advisor and judge for the Orange County Bar Teen Court Program. He also volunteers time as a Guardian Ad Litem for abused neglected and abandoned children.

Mr. Manglardi remains involved with his alma mater, the University of Central Florida, having served as President of UCF Knight Boosters and the UCF Alumni Association. He also serves as an officer of the UCF Foundation.