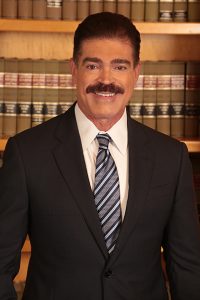 Mr. Martinez graduated with high honors, in the top of his class, from the Florida State University College of Law in April of 1986. He received American Jurisprudence Awards for Excellent Achievement in two courses of study: torts and criminal practice. He also was a recipient of the Barrett G. Johnson Award in International Law. While at the Florida State University College of Law, Mr. Martinez served as president of the Spanish-American Law Student Association.

Mr. Martinez is married, with three children and one grandchild. He has resided in Central Florida since the age of ten. He attended public grade school in Orlando, and graduated from Bishop Moore Catholic High School.

Mr. Martinez handles a wide variety of cases including motor vehicle collisions, wrongful death, product liability and insurance contract disputes. He has lectured for the Florida Justice Association, and has served as an adjunct professor at Valencia Community College.

Mr. Martinez is a member of the Florida Bar, the United States District Court for the Middle District of Florida, the Florida Justice Association, the American Trial Lawyers Association, the Osceola Bar Association and the Orange County Bar Association. Mr. Martinez is also a member of the Million Dollar Advocates Forum and Multi-Million Dollar Advocates Forum, organizations which limit membership to attorneys who have won million and multi-million dollar verdicts, awards and settlements.

Mr. Martinez has frequently given legal commentary, has appeared, or has been quoted, in numerous news outlets including Univision, Telemundo, the Orlando Sentinel, Orlando ABC affiliate WFTV, and Orlando CBS affiliate WKMG.