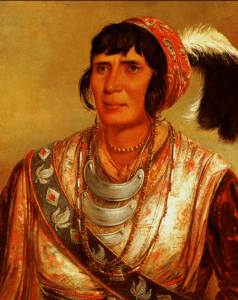 Osceola is a 1,500 square mile county in Central Florida that was created in 1887. There are two incorporated cities, Kissimmee and St. Cloud. The county named itself after a famous Indian chief – who was never really a chief, and only half Indian.

Osceola was actually born Bill Powell in Alabama in 1804. His father was a Scottish trader and his mother was a Creek Indian. His family moved to Florida when he was 9 years old. Billy settled in with the Seminole Indians. When he grew to be a warrior, he took the name Osceola. It is a Seminole Indian word meaning “black drink crier.” Apparently, the name suited him because he used to drink a bitter dark brew which made him cry.

He fought in the Seminole Wars of the 1800’s, leading several raids against the U.S. Army. The American government was fighting to forcibly relocate the Indians to reservations in the Western United States. The Seminoles, and the Indian population, in general, opposed the policy. Osceola led several raids against the invaders. The Army finally captured him on Dec. 31, 1837, during the Second Seminole War. The Army imprisoned Osceola at Fort Moultrie in South Carolina. He contracted malaria and died within weeks.

While he never officially made “Chief,” he was feared and respected. Supposedly, an Army doctor kept Osceola’s head as a memento. He used to put it on the bedposts of children that he wanted to discipline.

Other Than That in Osceola …

The county is home to the Osceola office of one of Florida’s premier personal injury law firms, Martinez Manglardi. Located at 903 N Main St, Kissimmee, Marinez Manglardi has been fighting for Florida families for nearly 30 years. Accident victims should call for a free consultation. We also have offices in  Orlando, Orange County, Seminole County, Lake County, Polk County, Palm Bay, Brevard County, Ocala as well as other cities and counties throughout Florida.