Posted by Martinez Manglardi
in News 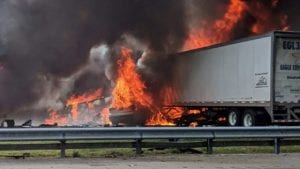 The idea behind autonomous — or self-driving cars — is that machines make better drivers. Ideally, once robots are doing all the driving, there will be fewer accidents. Computers aren’t stupid, they don’t get angry, tired or drunk behind the wheel. Even so, it takes a while to get the kinks out of any system – and self-driving cars and trucks are no exception. Engineers can’t anticipate all of the problems of computer-guided road tripping on the test track. We only achieve real-world results when we allow these vehicles – car or truck – to roam on real roads under real conditions.

For instance, the first fatality in a self-driving car accident happened in in 2016 in Williston, Florida. In that crash, a self-driving Telsa car collided with a tractor-trailer, killing the driver of the Tesla. Investigators found that an unanticipated flaw in the Tesla’s computer sensors caused the accident. The car was driving on a four-lane highway when a truck pulled across its path intending to make a left turn onto the roadway. But the sides of the big rig were white, which, for the computer, blended into the color of the sky. So the computer saw nothing, and there was a fatal truck accident.

Forbes says the data gathered from our testing on the Selmon Expressway is a big step forward for autonomous driving. Testing continues! #DrivingInnovation https://t.co/CFs8IiFMWC