Car Accident Law Firm in Orlando Says Careful on I-4

Car Accident Law Firm in Orlando Says Careful on I-4

Posted by Martinez Manglardi
in News 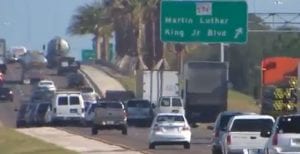 Orlando Car Accident Law Firm Martinez Manglardi PA is reminding drivers to be extra careful on I-4. Often called America’s Most Dangerous Highway, Florida’s rainy season is making things even worse. According to the Florida Department of Transporation, a drainage pipe recently collapsed after a heavy rain, creating a big hole in the road. Apparently, the crater didn’t cause any car accidents, but drivers are concerned. “The number one thing is safety,” driver Ray Bazzi told WFTV News Orlando.”If they’re not safe, I don’t feel good about it. I probably won’t use I-4 until I feel like it’s safer.”

Officials want contractors to inspect roadway sections with similar drainage pipes to prevent future collapses. “We don’t want incidents that happened Wednesday night, or flooding to happen,” FDOT spokesman Steve Olson told News 9. “We’ve seen perceptions that I-4 is unsafe. We don’t want I-4 to be unsafe in reality or perceived as such.”

At 120 feet high at its highest point, intricate flyover bridging is becoming a signature landmark of the I-4 Ultimate project in downtown Orlando. This impressive final product is taking shape where Interstate 4 (I-4) and State Road (S.R.) 408 join. https://t.co/daTHrbVZzS pic.twitter.com/p4IAZkKXJr

Whether a car accident or a workplace injury, victims of negligence can recover losses through a personal injury lawsuit. If you’re looking for the best car accident law firm in Orlando, consider the Orlando Personal Injury Law Firm of Martinez Manglardi PA. We’ve been fighting for injury victims and winning personal injury lawsuit settlements for more than 30 years. Call 407-846-2240 for a free consultation at one of our convenient Central Florida locations.