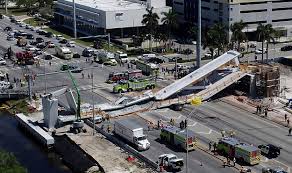 As yet another “Infrastructure Week” comes and goes in Washington, a pedestrian bridge collapse near Miami reminds us of the deadly price we pay for accidents, poor oversight, and shoddy construction. The structure, officially named Florida International University-Sweetwater University City Bridge, served as a walkway for students over a busy street. It was meant to make it safer for students to get back and forth to the Sweetwater neighborhood.

As far as transportation accidents go, this was one of the most shocking. Police say 6 people were killed and 10 were injured by nearly 1,000 tons of falling concrete and steel. The bridge accident flattened vehicles underneath it, and some were barely recognizable in the aftermath.

In an example of the randomness that attends such tragic accidents, two people in the same vehicle met strikingly different fates. Alexa Duran was an 18-year-old student at FIU. She was driving home from a doctor’s appointment. Her best friend was in the passenger seat. They were waiting patiently under the bridge for a red traffic light to change. In the blink of an eye, a freak accident, Duran’s life ended. He friend was able to walk away. Jenna Mendez, a Sweetwater Police Sergeant, caught the light behind Duran, and it may have saved her life. She saw the bridge collapse, so instead of losing her life as an accident victim,  she worked through the rubble to try to save lives.

We all try to avoid becoming transportation accident victims. Focusing on repairing roads, highways and bridges will help. According to the American Road and Transportation Builders Association, the states most at risk for bridge collapse are:

1. IOWA  Transportation experts list nearly 5,000—or  1 in 5—bridges in the state as “structurally deficient.”

2. PENNSYLVANIA The Department of  Transportation says that almost 20% or 4,500 bridges are at risk.

4. MISSOURI  Thirteen percent of the state’s 24,500 bridges are potentially unsafe.

6. ILLINOIS Transportation officials say 8.4% of bridges are in need of repair.

If you have suffered injury or loss from a transportation accident injury, contact the Orlando car accident attorneys at Martinez Manglardi today at 407-846-2240.