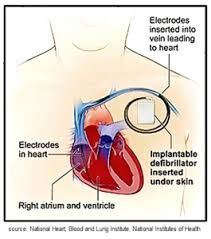 An implantable cardiac defibrillator is a small device that is surgically inserted in the chest to shock an irregularly beating heart back into normal rhythm. Some Guidant models had design flaws and defects that caused wire insulators to fail and short-circuit. Despite knowing of a least a dozen cases of the unit short-circuiting, Guidant did not inform doctors.

In March 2005, a 21-year-old college student died when an implanted cardiac defibrillator made by Guidant short-circuited. Two months later, another patient died when a similar Guidant defibrillator malfunctioned. Public attention prompted the medical device manufacturer to send a safety advisory to doctors, finally informing them of the problems.

An investigation by the New York Times revealed that Guidant had known about the defects for years. The company had fixed the design problems in later models but had done nothing about units already implanted in patients. Under pressure from the FDA, Guidant then issued a recall of 38,000 of its implantable defibrillators.

If you suspect that you have an injury that may have been caused by a defective medical device, consult a medical professional. Then call the legal professionals at Martinez Manglardi. Call 407-846-2240 for a free consultation.

This 2005 Guidant defibrillator recall was just the beginning of years of regulatory legal troubles and personal injury lawsuits for the company. Ultimately, the company recalled nearly 90,000 defibrillators.

Martinez Manglardi was among the first Florida law firms to file a Guidant defibrillator personal injury claim. Our experienced team of medical device recall attorneys has been fighting to protect Florida families for nearly 30 years.

If you have been the victim of a defective medical device, call 407-846-2240 for a free consultation. We have offices serving Orlando, Apopka, Orange County, Palm Bay, Brevard County, Lake County, Ocala, Polk County, Seminole County, Kissimmee, Osceola County, and throughout Florida.