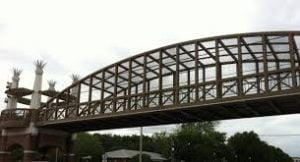 Apopka is a city of about 50,000 people located 16 miles northwest of Orlando. The name is a Seminole Indian word that means “potato eating place”. There were about 200 Seminoles in Apopka, but they were forced to find another place to eat potatoes after finally losing the Second Seminole War to the United States Army in 1842.

Florida had been a U.S. territory since America took it from Spain in the First Seminole War. The government was eager to have Florida become the 27th state to join the union. With the Seminole war concluded, Congress passed the Armed Occupation Act, which basically gave Indian land to white settlers. Florida became a state in 1845.

The settlers built roads and houses as Apopka grew into a sizable trading post. The biggest building in town was a Masonic Lodge at the intersection of Alabama Ave. and Main Street. In 1882, the square mile area around the lodge incorporated as the City of Apopka. Today nearly 50,000 people live in Apopka. (According to census figures, 150 residents are descendants of native Americans, so the indigenous population abides.)

The city has preserved its history and visitors can find many interesting and noteworthy sites. The  Seaboard Air Line Railroad depot and the Ryan & Company Lumberyard  are on the  U.S. National Register of Historic Places. Several prominent area homes are of historic interest and are also listed as public treasures.

The city is also home to the Apopka office of one of Florida’s premier personal injury law firms, Martinez Manglardi. Located at 3840 East Semoran Blvd., Marinez Manglardi has been fighting for Florida families for nearly 30 years. Accident victims should call for a free consultation. We also have offices in  Orlando, Orange County, Seminole County, Lake County, Polk County, Kissimmee, Osceola County, Palm Bay, Brevard County, Ocala as well as other cities and counties throughout Florida.